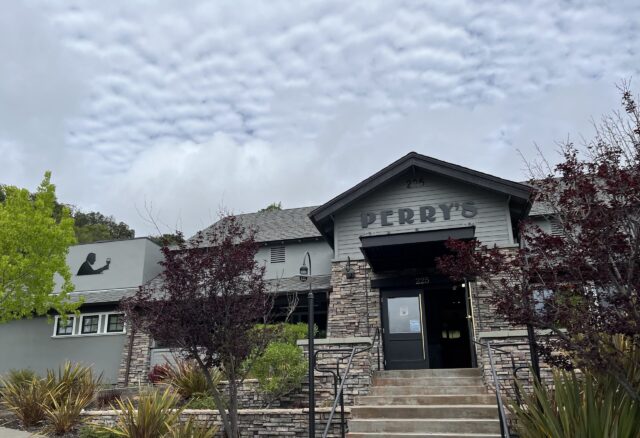 Perry’s, the iconic 52-year-old San Francisco institution is expanding once again. Come May 16, Perry’s will be opening its doors to the Novato community at a location familiar to many, the former Wildfox restaurant located at 225 Alameda del Prado, Novato.

The expansion will mark Perry’s fourth location in the Bay Area, joining two restaurants in San Francisco and one in Larkspur. Owner and longtime Marin County resident, Perry Butler, says this expansion is very special to him.

After Wildfox restaurant went out of business during the COVID-19 stay-at-home orders, Butler said he was approached with the idea of opening another Perry’s restaurant in its place.

“They [the prior owners of Wildfox] approached us about a year ago and said, ‘Hey, how about turning it into Perry’s?’’ Butler explained. “So, we thought about it. The first concern was, would we be competing with ourselves in Larkspur? It’s only eight miles apart. However, the feeling was that this is a really different community up here and that we would not really hurt ourselves in Larkspur. We thought, ‘Well, what the heck? Let’s take a shot.’ So, we signed the lease, and then started the work in October/November of 2021.”

The menu at each Perry’s location varies slightly to give each chef room for creativity, Butler said. Yet, customers coming to the Novato location can still expect Perry’s signatures such as the grilled artichokes, french onion soup, the Perry’s Burger, cobb and iceberg wedge salads, and prime steaks. Brunch will bring benedicts coated in creamy hollandaise sauce, various scrambles, fluffy French toast along with mimosas, bloody Marys, and much more from their full bar.

“I’m very proud of our menu because I think it fills many people’s needs and desires,” Butler said. “No matter what time of day, whether it’s lunch or dinner, we have something that you’re going to like.”

Why is Perry’s so beloved? Let’s backtrack…

The classic American restaurant and bar first opened its doors on Union Street in San Francisco in 1969. Owner Perry Butler was 26 at the time and had recently relocated to San Francisco after graduating from Dartmouth and working in advertising in Manhattan, New York.

Butler described Union Street in the late 60s as the polar opposite of where he was located in New York. He and his wife at the time had always talked about opening a restaurant of their own someday.

“It was so different than New York. New York was the headquarters of the advertising business,” Butler said. “It was really happening, and electric, and dynamic … It was exciting. Out here [in San Francisco’s advertising world], it was much sleepier, quieter, and less dynamic. So one day I came home and sort of complained about not being fulfilled and my wife at the time said, ‘Well, let’s open that restaurant that we said we’re going to do someday.’ Perry replied, ‘Good Lord.’”

Following the conversation with his wife, Butler got to work and opened Perry’s to the public in August of 1969. The restaurant was decorated with what many recognize today, the blue and white checkered tablecloths, hexagonal tiled floor, wood-paneled memorabilia clad walls, and a mouthwatering menu of American classics.

But what made Perry’s so beloved was not only the delicious cuisine and finely crafted cocktails, people fell for the atmosphere too. Perry’s has been compared to the popular American TV comedy series ‘Cheers’ due to a similar atmosphere of friendly familiarity.  Like the show, Perry’s on Union Street was also “where everybody knows your name.” Butler created that atmosphere with the help of his staff. He’s known for hiring some of the best in the business, especially when it comes to bartending.

“It’s really about the character and the personality of a person,” Butler explained. “You assume that anybody can make or be taught to make a good drink, but you have to have some charisma, some magnetism. I dare say we’re lucky to have a lot of people with a lot of that, and it makes all the difference in the world, and it makes it fun for the person on the other side of the bar. No matter what their drink is they’re having good conversation and good interaction with the bartenders. Warmth and people who care and people obviously have integrity, that’s what we care about here and the rest takes care of itself.”

Perry’s Novato will open to the public Monday, May 16. After its Monday opening, the restaurant will be open for dinner only from 4 to 9 p.m. Sundays through Thursdays and 4 to 10 p.m. Fridays and Saturdays for the first three weeks as part of its “soft opening.” After the soft opening period, Perry’s hours will expand to include lunch from 11:30 a.m. to 4 p.m. on weekdays and brunch from 11 a.m. to 3 p.m. Saturdays and 10 a.m. to 3 p.m. Sundays.

To book a reservation or learn more visit Perry’s SF.