SLN Sits Down With Local Novato Band The Happys 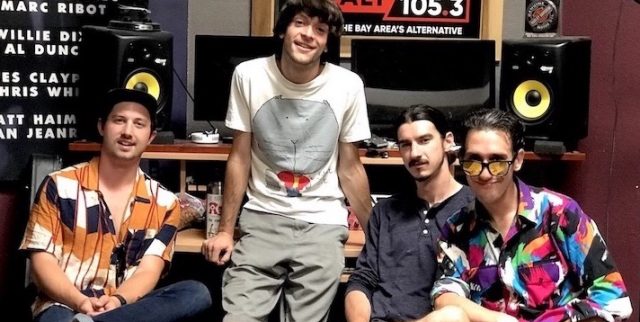 Shop Local Novato recently sat down with local alternative-rock band The Happys to take a deep-dive into Novato’s music scene. They told us which venues they like to play and namechecked some local businesses they love—apparently independent Grant Avenue coffee shop Dr. Insomniacs makes The Happys happy. We found out how their experiences in Novato inspired them to make music, and how they plan on using their music to better the community by collaborating with Music Never Dies Studio, Jerry’s Delicatessen and BeerCraft to bring more events to Downtown Novato.

The band consists of lead vocalist Nick Petty on guitar, Alex Sanchez on vocals and guitar, Brett Brazil on vocals and bass, and Ryan Donahue on drums.

What are some of your favorite venues to play in Novato?

Alex: We like to play at Hopmonk [Novato’s premier music venue, bar and restaurant, located in Vintage Oaks Shopping Center].

Nick: Hopmonk is chill, for sure. I will say we love Hopmonk and all the people putting together the events. Finnegans [Marin Restaurant and Bar on Grant Avenue] is a chill place to play.

Alex: This place is gonna be a cool new venue right here, Jerry’s Delicatessen [The new sandwich joint off Redwood Blvd., where Perry’s Delicastessen used to be].

Nick: Pretty sure that this venue [Jerry’s Deli] will have an influx of music coming in. I’m very excited. Especially for downtown, because we haven’t had much downtown since the Novato Theater shut down. Literally feeling the vibe of that theater being gone [The NovatoTheater Board is currently working on reopening The Novato Theater. Find out how you can help them bring it back here].

Alex: So this parking lot right here [between BeerCraft and Jerry’s Deli] is going to be an outdoor patio with fire pits and a little stage.

Nick: For all ages too. High school kids are going to be able to play here.

What happened to Perry’s?

You mentioned in an earlier conversation that The Happys would be teaming up with BeerCraft for a number of upcoming events. Can you tell me about your relationship with the taproom?

Alex: The guys at BeerCraft are always super supportive of us, they come to our shows, they get us beer. Yeah, they’re just really cool guys. These guys [BeerCraft and Jerry’s Deli] are working super close. Jerry’s isn’t going to sell craft beer for instance, they’re gonna serve the food to BeerCraft. It’s really a co-collaborative environment. Which is really great.

Nick: I love BeerCraft, they’re really great people. I look forward to linking up with them and putting projects together and all sorts of stuff.

Alex: So a couple weeks ago they had hay bails, a little stage over here, tons of people, a rotisserie pig [for BeerCraft’s 3rd Anniversary Party].

Alex: Those kind of events are the ones we’re talking about working with them with. We’re just trying to build the community and the music vibe here in Novato because it’s something we don’t really have.

Nick: Community is the key to solving everything in my opinion. We’ll see what happens, cause if we can execute it well with this venue [Jerry’s Deli] it could be a big change for Novato in the best way. We’re trying to cure kids’ boredom, keep them stimulated, keep them having fun.

According to your website, you describe your band as dysfunctional surf, pop-punk, garage? Can you elaborate on what that means and who your influences are?

Brett: We kind of have a broad sound, we couldn’t really choose one or two little terms. Dysfunctional is kind of…

Nick: We’re kind of over it. I think that, personally, I’d call us alternative-rock or 90’s pop-punk. A lot of 90’s stuff is coming back, especially in this area.

Brett: Yeah, we’d say Nirvana and Sublime are the two main bands that kind of describe us.

Can you describe the origin of your band? How did you guys get together, and how long have you guys been together?

Nick: I started playing in like 2011 or so. I wanted to play music. I met Brett first, then I met Alex at our album release in 2016. And then, there were a couple players on the way, but everyone around here [currently in the band] has been playing for the last year and a half. Except Brett, he’s been in the band maybe four or five years. Quite a while.

I read that you work with local film company Will Rushton Films. What does the making of a music video look like? The songs and videos seem very close to your own story, do you have a lot of say in the writing and direction of the videos?

Brett: A lot of it ends up being really spur of the moment, but we’ll have a little bit of a plot.

Nick: We’ll have, I don’t know, three or four main ideas that we’ll come up with. Like, ‘hey we should film something at the headlands or we should film some of the [Old Town] Novato Fountain.’ In the moment, we just try to turn up, have fun, see what we can get into.

What are your favorite places to eat in Novato?

Alex: I already know, I’ve been here for so long. Italian Delite [a popular Italian sub shop]. That one’s super good, the family has been around here since the 80’s, ya know?

Nick: Mi Pueblo [an authentic Mexican eatery, with an enjoyable outdoor patio] and Dr. Insomniacs [an award-winning cafe, famous for their delectable coffees and teas].

Alex: Oh, Dr. Insomniacs is a good one. I’m actually going there after this.

Brett: I’d have to say my favorite food spot in Novato is… Dr. Insomniacs is pretty bomb. And Great Donuts [a delicious local donut spot].

With over 6,000 downloads on Spotify, nearly 20,000 views on YouTube, two albums, and features on the radio, it looks like your band is taking off. What’s in store for the future? What are the long term goals for the band?

Brett: This summer, we’re gonna be recording a new album, which we’re really excited about. We have all the songs figured out, so it’ll be a full length, which is really exciting. We’re busy this summer with shows, so [the album release] might be late summer, fall, winter. But this summer we will be recording.

Read the full The Happys Interview

Create a New You this New Year (with a little help from Novato businesses)
Micro Food Hall, Local Kitchens coming to Novato
Shop Local for all your last minute holiday gifts